This is a list of Frequently Asked Questions (FAQs) about Aerodyne Aerosol Mass Spectrometer (AMS) hardware. The initial list is based on the presentation by Ed Fortner and Bill Brooks of Aerodyne (with input from Wade Robinson and John Jayne) at the 10th AMS Users Meeting in Toronto, Canada. Anyone from the AMS Community is welcome to add to the questions and answers. If you don't have a Wiki account yet, you can request one by clicking here.

How much information does Aerodyne need to help me diagnose my problem?

A: as much as possible. E.g. we often get questions such as "The AB is low, what should I do?". It is impossible to know what the cause his without knowing many additional pieces of information, such as your flow rate, state of pumping system, MCP voltage, single ion measurement, etc.

I have questions about AMS Software

The FAQs and information about AMS software are kept in separate Wiki pages:

I have questions about what the AMS data mean

Is there a general diagram of the signals and connections in the ToF-AMS?

Yes! and it is posted below. This diagram was developed by Weiwei Hu (Peking Univ.) during her stay with the Jimenez group. 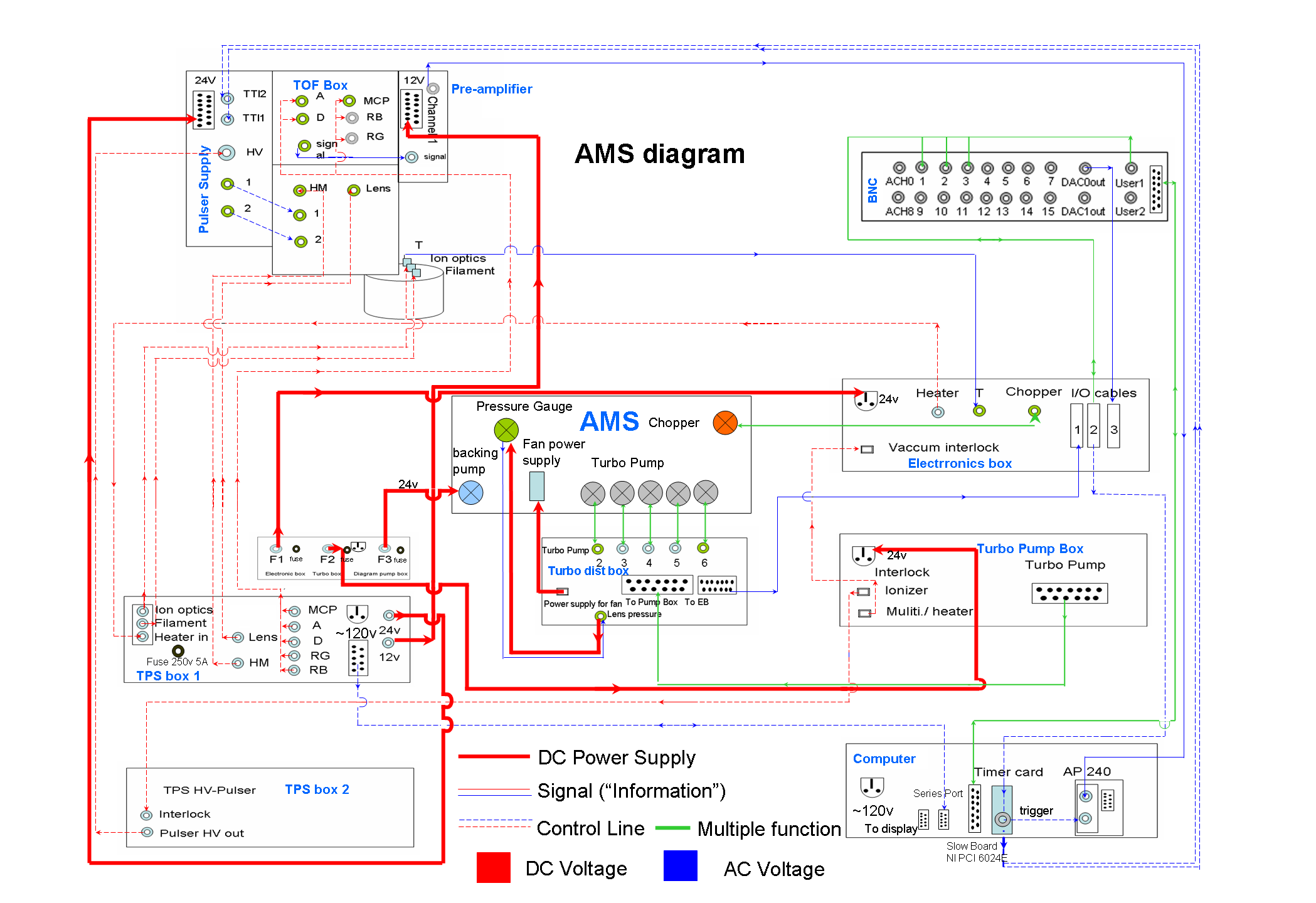 Cloning the AMS HD simply refers to making an exact copy of the HD that is in the AMS computer as opposed to a backup. HDs are really good at failing and this just ensures minimum downtime of the AMS computer as well as preservation of settings/software.

There are several different ways to accomplish this but the central idea is that you need to copy the drive without the OS running (to allow you to successfully copy system files etc.)

We typically use an adapter from apricorn here

This allows for a USB connection from the drive in the AMS computer to a bare external drive (no enclosure). It also comes with 3rd party software that you can boot to in order to clone the drive.

The AMS computers typically use a 3.5" form factor drive, but some of the older models have IDE connections while the newer models have SATA connections. This is something that you will need to check on your computer before you order another drive. We typically buy drives from newegg

This should provide you with a spare drive that you can use to replace the internal drive on your AMS computer in case of failure.

What are the operating currents for all pumps?

What are your backing pump pressure and lens pressure?

Answer: you can read both of them with the same 10 Torr Baratron pressure gage (displayed in the electronics box). There is a 3-way valve, when pointing up if reads the lens P, when pointing down in reads the backing pump P.

Why is my flow rate so high?

A: The key here is that the AMS does not measure a flow. It is measuring the pressure in the lens using a 10 Torr Baratron gage, and a calculation is done in the DAQ software to give the flow rate. So if you are measuring the backing pump pressure then you will have a flow rate value (as displayed by the DAQ software) which will be much higher than expected. Simply turn the valve on the front of the AMS to measure the lens pressure and your flow rate will be correct.

If one turbo pump fails can I keep running the system?

Answer: NO !!! This may kill several other pumps (and that has actually happened to at least one group).

Can I keep a spare turbo pump in its box for a year?

A: No!!! If you do that, the lubricant in the pump bearings will phase-separate, and the pump will likely fail shortly after being installed. Every pump should be spun at least every 9 months for a minimum of 30 minutes. If possible the 'soft startup' mode that is designed into the varian controller/t+ software is preferable. If a pump sits for longer than 10 months it is recommended that the pump be sent back to varian for re-channeling (~$450.00)

How can I check whether my instrument is leak-tight?

A: turn the pumps off and close the valve between the turbo pumps and the diaphragm (backing) pump. Then record the increase on the pressure of the vacuum chamber (with the lens P meter) vs. time. The leak rate should be a fraction of 1 Torr per day, and in a really good instrument (such as the CU AMS during ARCTAS it was less than 0.1 Torr/day).

What is the fitting on the MD1?

This is a BSP/ISO parallel thread that replaces the standard hose barb fitting that is delivered with the MD1. 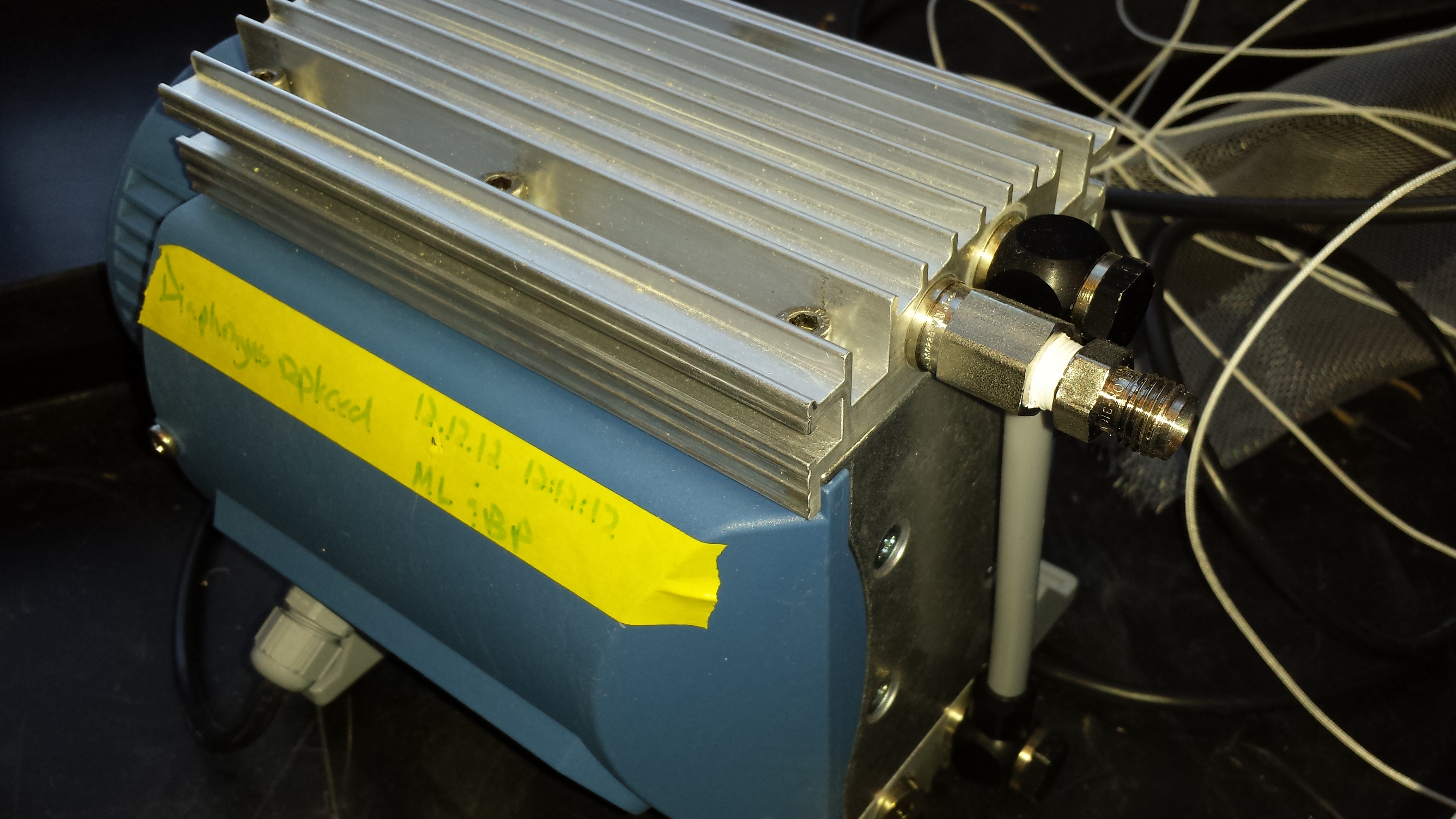 How do I replace a diaphragm on a MD1? 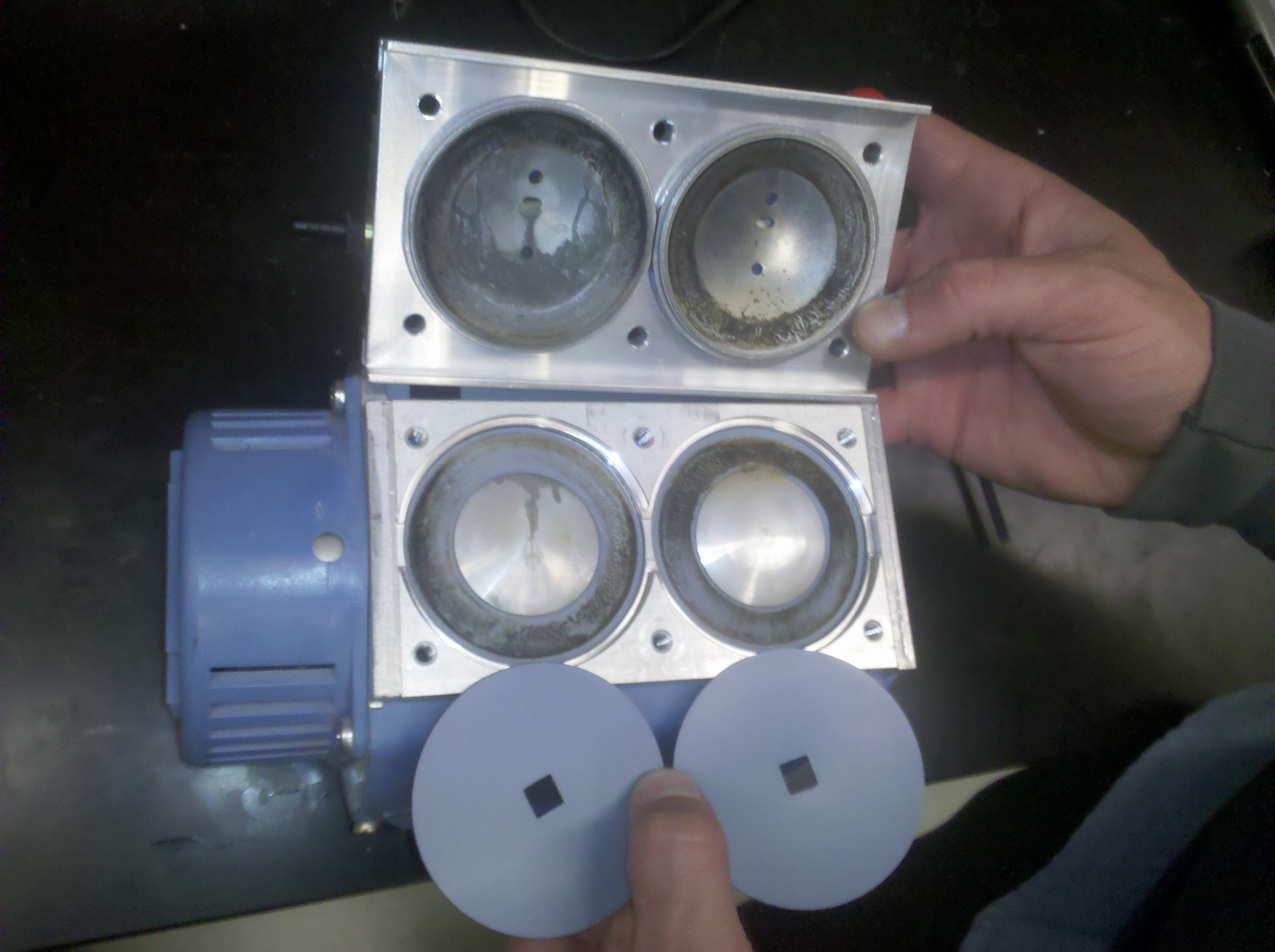 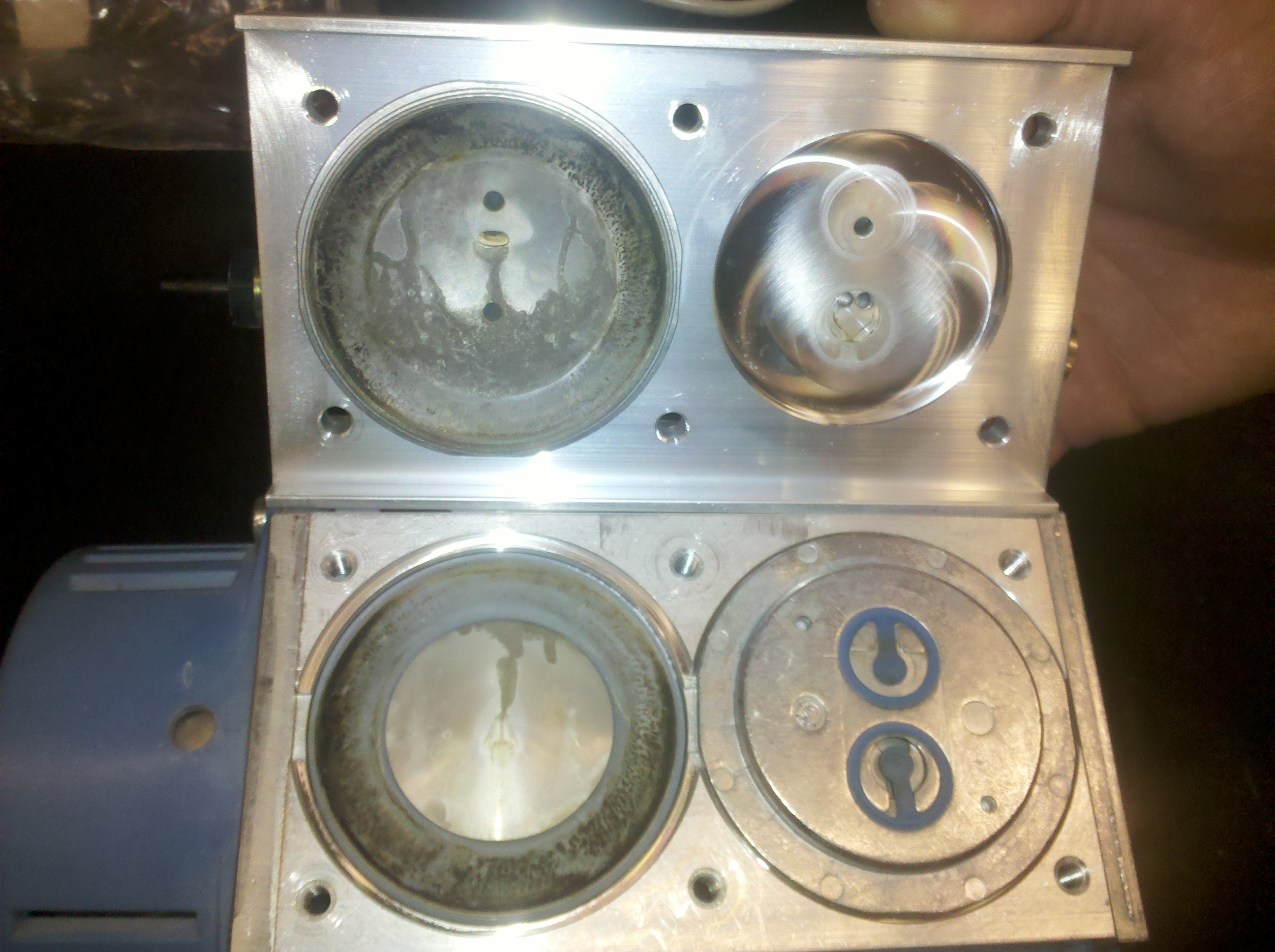 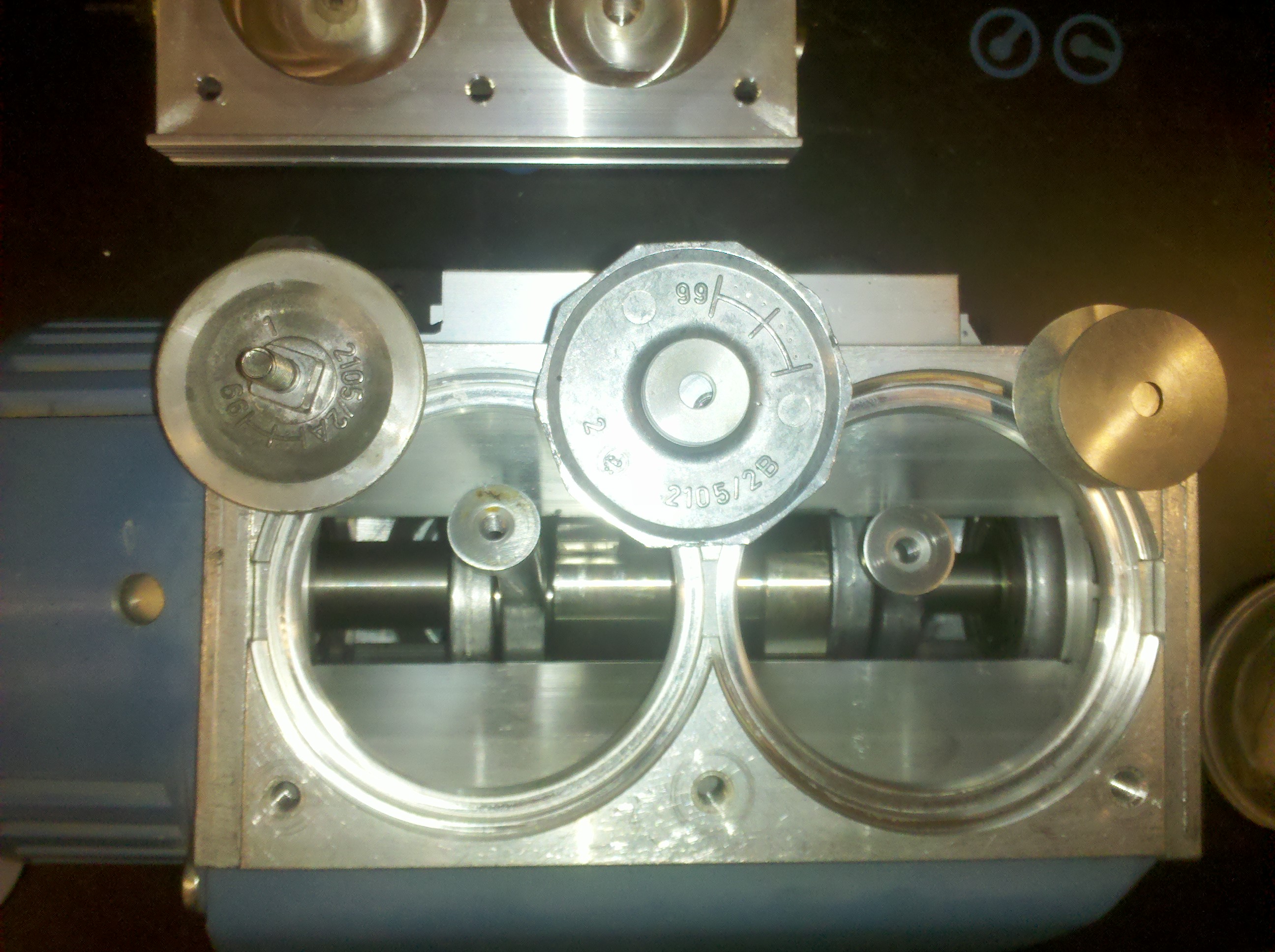 Proper Turbo Venting according to Varian

Below are directions for testing your interlocks. See interlock overview by Bill Brooks for pictures and related details. Always test both interlocks after moving instruments or disconnecting cables. See next subtopic below for further details on how interlock works and comparison of new and old-style pump boxes. 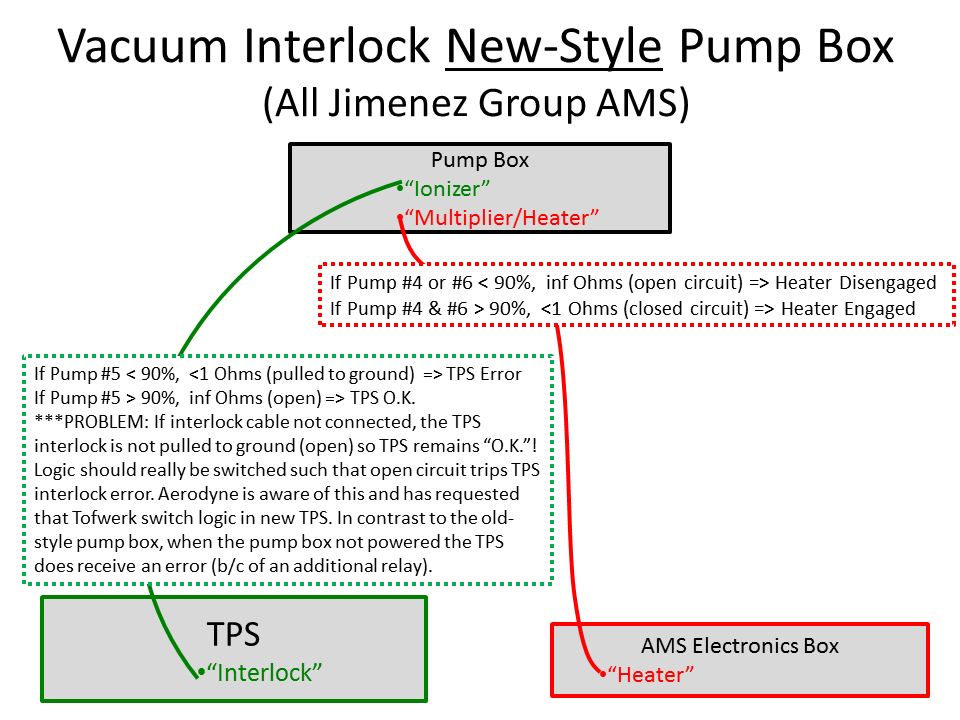 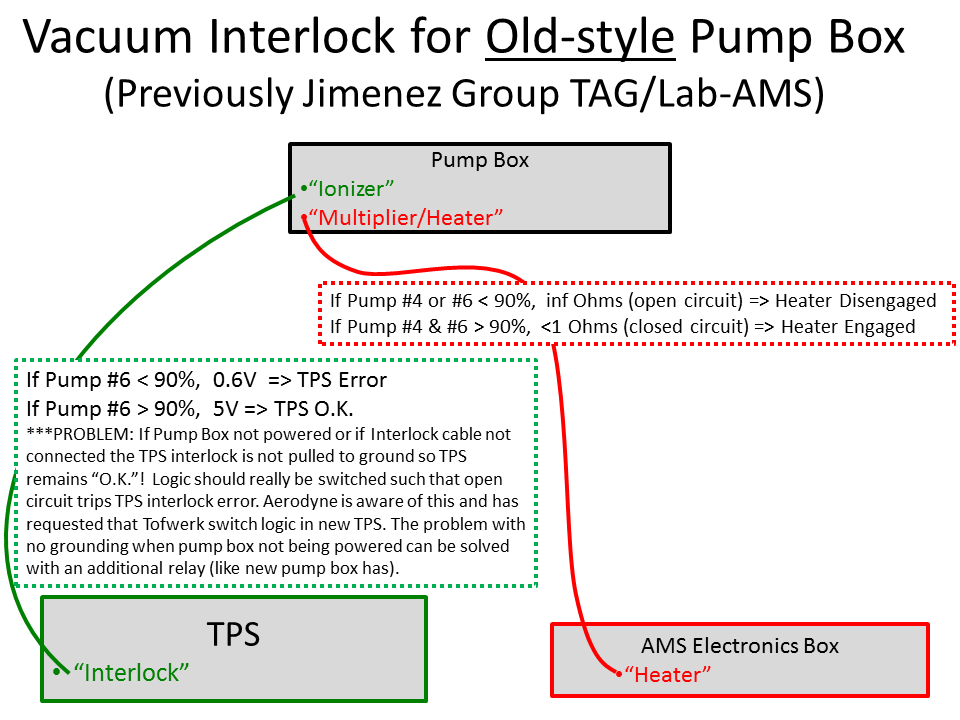 How do I re-plumb my vacuum system?

When should I align the lens?

Answer: After shipping or if there is reason to believe that the instrument has been bumped. In most instances the alignment won't change, but if it happens to change it can have catastrophic consequences for your data, if you don't check before the measurements. We know that this problem has degraded data for several campaigns of several prominent groups in the AMS community.

How do I change my MCPs?

When can I turn on the MCP after venting?

A: It depends. It is always best to pump overnight, but if the system has only been vented an hour or two, and there is a need to collect data right away then after about 1/1.5 hours.

How can I ship or store my MCPs under vacuum?

Note: In all cases, if you're transporting/shipping them it is very important that the black MCP holders do not rattle around otherwise the MCPs they may crack. Use some crumbled aluminum or o-rings to create a snug fit.

For any of these methods you can tee into the AMS vacuum system or use a separate pump (~1 torr). If teeing into AMS system best practice is to keep the MCP container valve closed and periodically open it so that in the case that the AMS pumping fails and vents, your spare MCP is not exposed to room air (which will destroy it due to H2O vapor exposure).

When can I turn on the filaments after venting?

At which point were different updates to the AMS electronics introduced?

What are the pin-outs for the blue-connector cable leading from the 6024E card to the BNC terminal block? 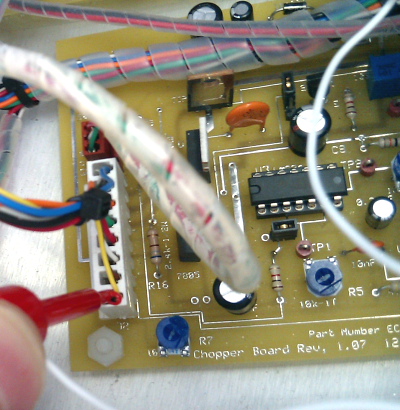 It should be a clean square wave; watch for it to change in width when toggling the servo movement using the DAQ/Critter. 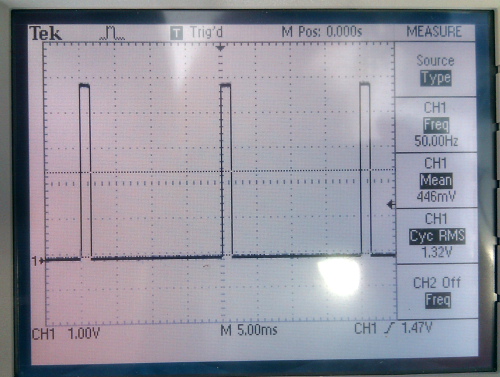 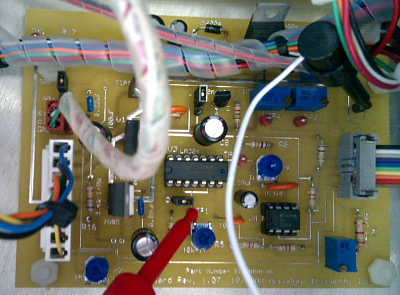 Variations in the reflectivity of the chopper wheel will propagate into the optosensor signal, but the positions of the slits should be very obvious: 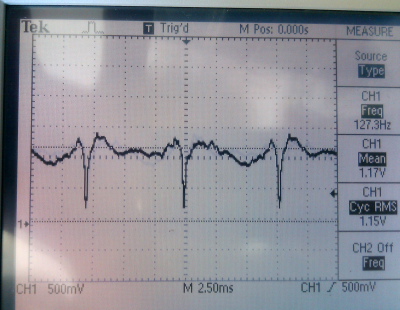 Is there a diagram of all the voltages in the TOF ?

Yes, it is here with the usual username and password.

The electronics box interfaces with the slow board (NI-6024 connected to the BNC-2090 rack) thru 2 sets of IO Cables (IO2, IO3), with DB-9 connectors on one side and 4 BNCs on the other. IO2 carries all the sensor voltages (flows, pressures, temperatures) while IO3 has the HB. If you observe flaky behavior on any of these voltages which correlates with the orientation of the BNC connector, the cable might have been frailed. Spares can be ordered from L-com, P/N CTL5CAD-3

Note that the configuration described above and also shown in the general AMS wiring diagram only applies to systems shipped prior to 2009. For newer systems, the HB is also carried on IO2 and IO3 is not used at all. A detailed schematic comparing both configurations can be found here

Miscellaneous wiring and electronics diagrams, etc. (some also linked above)

What are the relays in the TPS

What is the pin-out on the ion optics cable?

My Airbeam is low

This problem is generally due to loose or missing connections in the pre-amp assembly. See instructions for diagnosing.

I have MS, but not a PTOF airbeam

I don't have a PToF Airbeam after I shipped the instrument

My chopper servo is not moving

After a few hours of data acquisition, the double-peak would come back repeatedly. It improved temporarily with changes in the chopper frequency while changes in the timing parameters did not make a difference.

Note that the ‘double peak’ can also be present for particles pToF signal, but that’s trickier to catch unless one is sampling mono-dispersed particles.

I looked at the chopper signal (Tee’d into the line that goes to the timing card) on the scope (It’s better to zoom in to see 2 cycles). In one of the cycles, there was a ‘blip’ before the opening signal of the chopper, peaking ~ 2-3 V. The 2nd cycle had no ‘blip’.

It’s possible then that the timer card was being triggered with the ‘blip’ on half of the cycles and therefore Time Zero of the pToF two chopper cycles was not the same, leading to a double peak.

To fix the problem, first, check the comparator signal of the chopper circuit and set it to ½ photodiode signal as explained in the link below if it’s not set properly http://cires.colorado.edu/jimenez-group/QAMSResources/Docs/Chopper_VrefSetpoint.pdf

If this doesn’t take care of the double peak, remove the chopper flange to make sure chopper assembly is well fixed and not wiggly. Now that the system is open you might as well clean the surface of the chopper and the photodiode as well!

If the problem is still there, maybe the timing card or timing card cable need to be replaced.

I have problems with my heater voltages 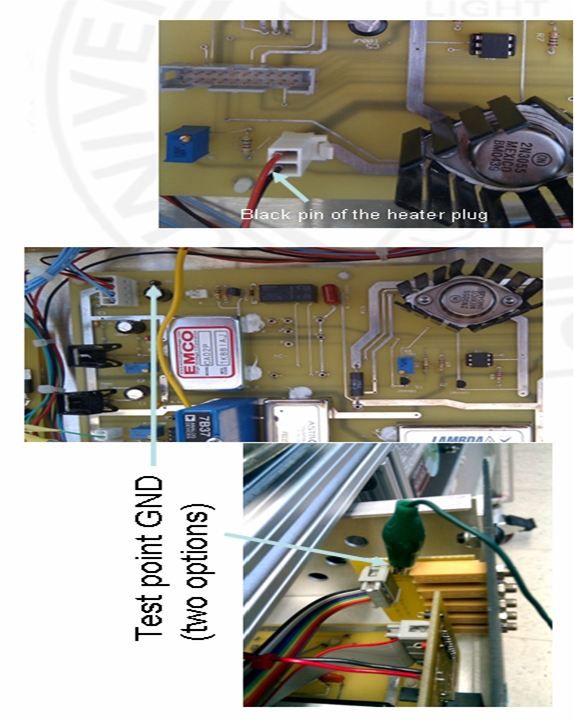 The “heater power” voltage should be ~10V with the plug disconnected. If this is not the case, the board needs troubleshooting 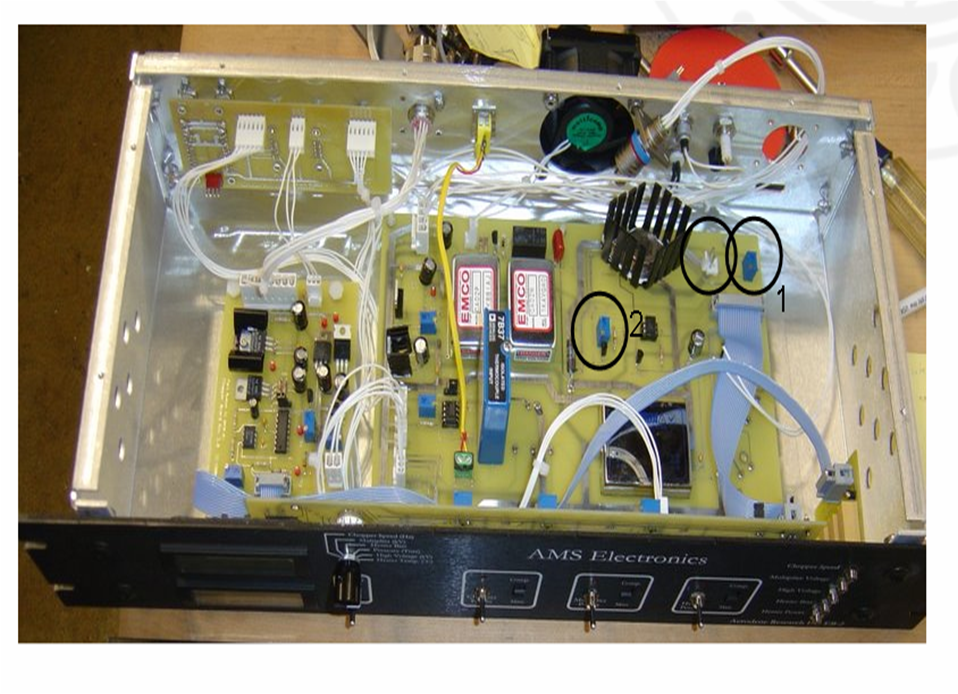 Heater bias is tied to ground 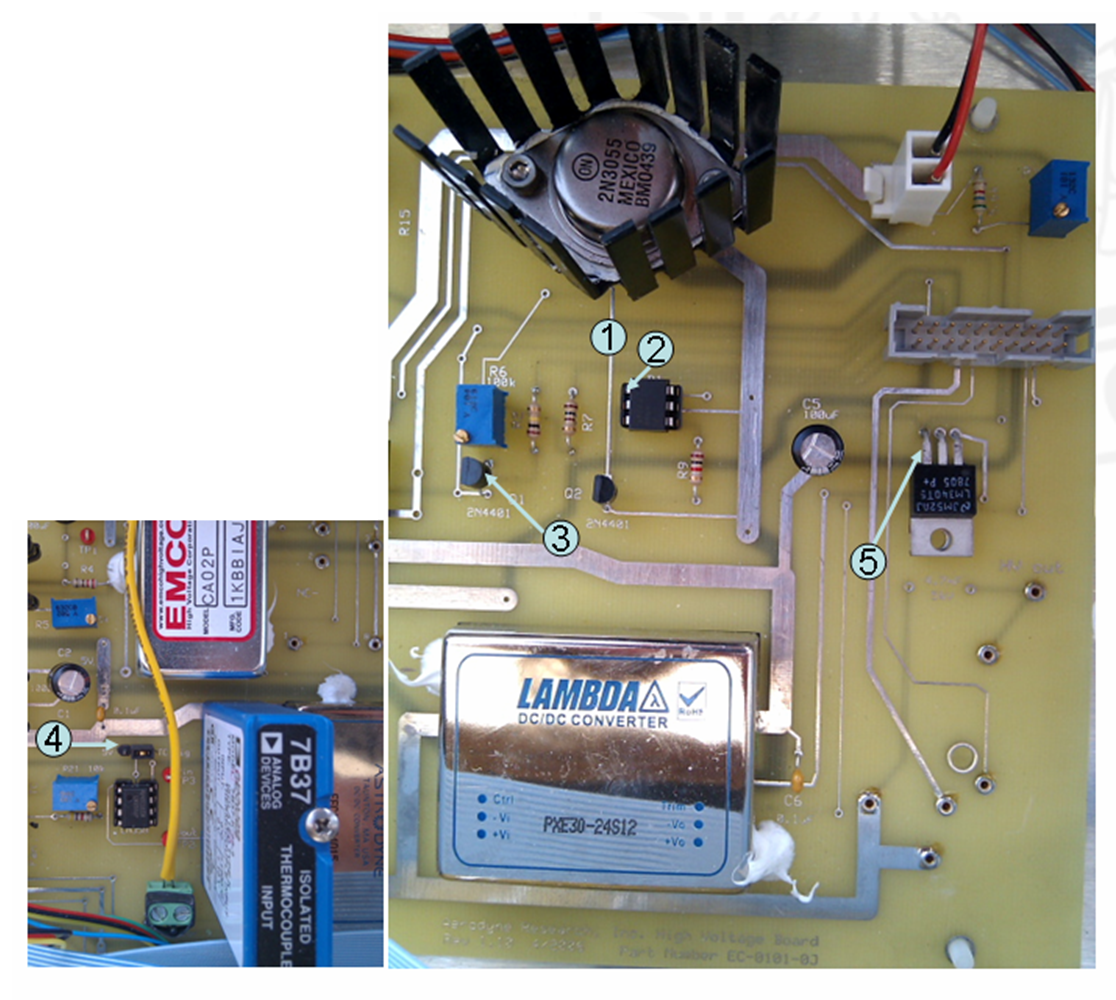 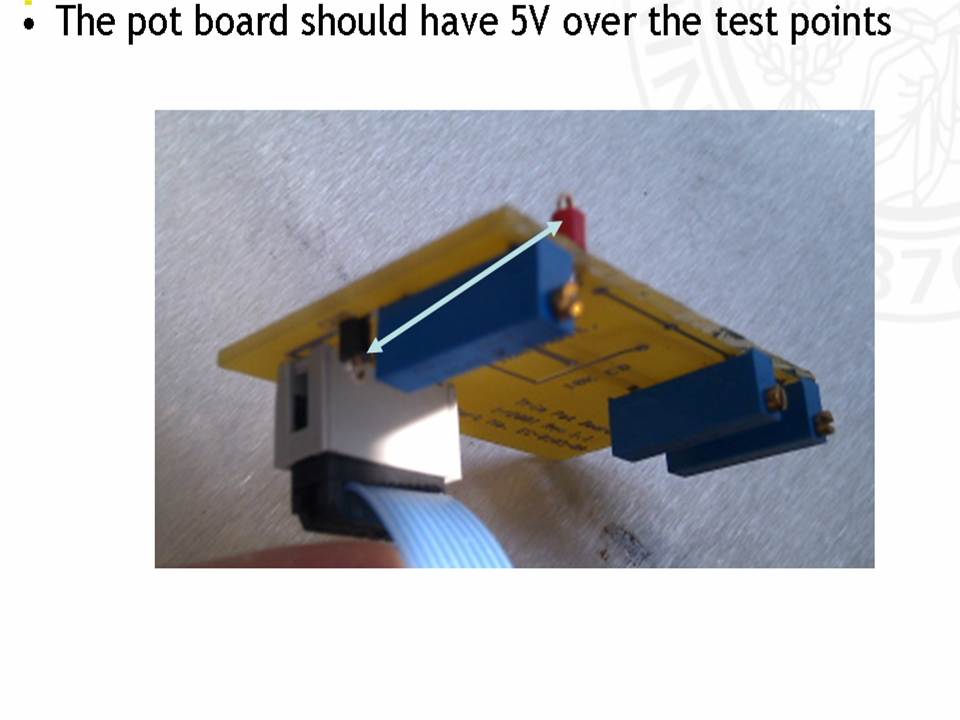