How can a sensible averaging time for AMS Size distributions be estimated?

While size-segregated AMS data is not fundamentally different from total MS data, the duty cycles are typically significantly lower both due to the inherent duty cycle of the chopper wheel used to acquire size distributions and the fact that most AMS practitioners spend less time acquiring in size-segregated mode. Hence the (species-dependent) detection limit for size segregated data can be easily derived from the MS detection limits (see above) by just applying the SD mode duty cycle (both for the chopper wheel, e.g. for how long does the chopper transmit particles, and for the acquisition, e.g. how long is size segregated data acquired vs total mass mode) to the AMS detection limits.

In most ground studies, Dutycycle(SD Mode)/Dutycycle(MS Mode) ~ 0.2. For the typical operation of the CU AMS aircraft, it's ~0.1. The mass duty cycle of the chopper wheel is either ~2 (4% for aircraft studies) if it was obtained in single slit/"regular PToF" mode (please check the data header or inquire with the data provider to confirm this detail) or ~50% (for multislit, "ePToF" mode). So taken together, that means that to get the same detection limit as in MS mode, for ground data one would have to average 3x longer (ePToF) or 16x longer (regular PToF), while for the aircraft data it would be 4.5x (ePToF) and 16x (PToF)

The DL discussed above describes the amount of mass needed to get a valid mass spectrum if you sum up all size channels and hence is considerably lower than what is needed to get a good signal for a full 40-60 channel AMS SD. One obvious criterium is to make sure that the integral of the size distribution gives physically meaningful species concentrations, as described by the normalization factor (SD integral to total SD ratio) that is reported in the CU AMS data files. Based on the ATom analysis (ePToF, 20 size channels per decade, which is a reasonable value both in terms of intrinsic resolution and noisy reduction), to get sensible values (so no negatives and no crazy positive values either), one needs about 6-15x DL(Species X, SD Total), depending on Species X. Using an average factor of 10x, that would translate into integration times 30x longer (ePToF ground), 160x longer (PToF ground+aircraft), 45x longer (ePToF aircraft)

The above values will provide an interpretable, but still very noisy size distribution, so for robust, presentation-ready plots 3-4x higher averaging times are typically needed, so about 120x (ePToF ground), 640x (PToF ground) and 180x longer (ePToF aircraft). By way of example, for a purely organic ambient aerosol distribution assuming a CE~0.5 and an average concentration of 10 ug sm-3, that would mean:

These values scale with sqrt(N), so for an average OA concentration of 1 ug m-3 this values need to be trippled.

Can PMF be applied to aircraft datasets?

PMF can be successfully applied to aircraft datasets, e.g. see Marais et al., 2106 which reports IEPOX-SOA from PMF of the CU aircraft AMS dataset from the SEAC4RS campaign, or Hodshire et al. (2019), that reports extracting MSA from the remote ATom dataset. Primary OA (POA) can be extracted for aircraft studies close to sources, see e.g. Nault et al., 2018 for the KORUS-AQ aircraft campaign. However POA can be a more difficult problem for remote datasets, see below.

Why can't you always extract POA through PMF of aircraft datasets?

For studies close to sources (e.g., Jimenez et al., 2009), positive matrix factorization of AMS mass spectra (PMF; Ulbrich et al., 2009) can be used to estimate the contribution of primary sources (mostly from transportation, heating, cooking, and biomass burning) to total OA. This approach is not suitable for remote aircraft datasets (such as the ATom campaigns). To accurately resolve a minor factor such as POA in a remote AMS dataset, there needs to be a combination of

As an example of a nearly ideal case, in Hodshire et al. (2019) we extracted MSA by PMF from the ATom-1 data and were able to match that factor with our independently calibrated MSA species. A very distinct and nearly invariant mass spectrum was measured repeatedly near sources (MBL) and was mostly absent elsewhere, thus providing strong spatiotemporal contrast) and accounted for about 6% of the fractional mass and 15% of the variance in time. Thus, all the conditions were met. For POA, on the other hand, the air sampled in ATom and coming from, e.g., Asia has POA and SOA very well mixed, with little change in their relative mass fractions vs. time (as the aircraft flies through that air mass). POA is very low, as documented in Hodzic et al., 2020. Atmospheric aging makes the spectra from all OA sources more and more similar as measured by AMS spectra (Jimenez et al., 2009). Thus, most of the conditions above are not satisfied for extracting POA by PMF analysis of this dataset. 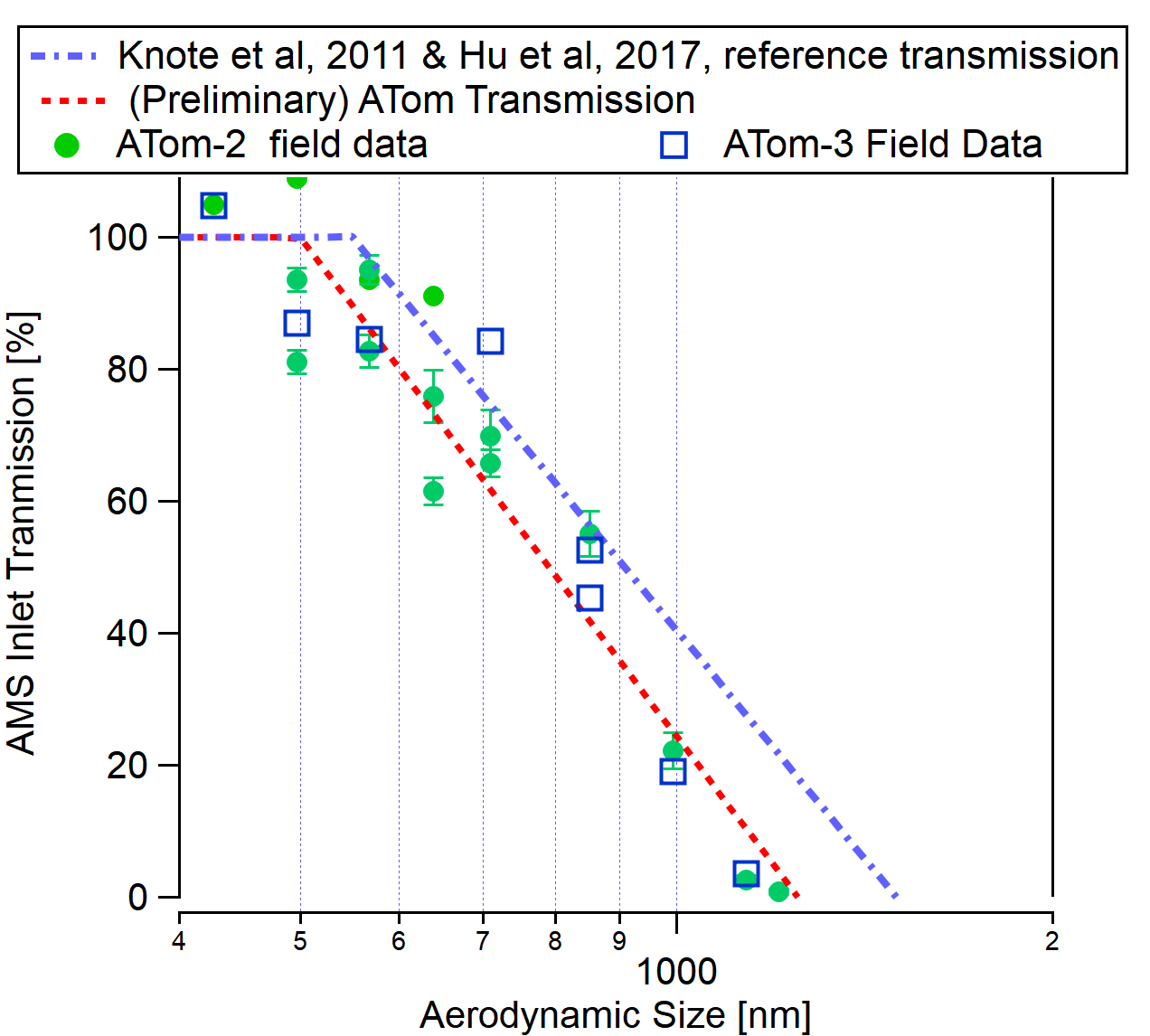